Doug Long is our Spotlight Member of the week!!! He has been with us for almost a year.  Doug is awesome, we love having him in class and he is great example of everything you can accomplish if you don't give up!  He always comes to the 4pm classes on Tuesdays and Thursdays.  We've watched Doug's movement and fitness level improve drastically while he has been with us.  Among many improvements he has gone from struggling to walk across the balance beam to being able to squat while standing on it! Congratulations Doug!!  Keep up your hard work and consistency 🙂

What is an interesting fact a 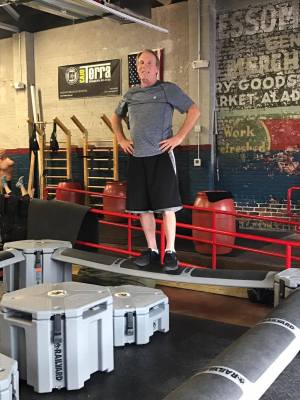 I was not raised on a farm, but did a lot of farm work growing up for extra money. Along with picking corn, peas, stacking hay, and barning tobacco, I remember picking cotton. It’s funny because back then all that work seemed normal, but after you get away from it, you actually see how much work it was.

My wife’s employer was generous enough to provide all his employees with memberships. After she begin to workout, she told me how much she enjoyed it and what a great place it was. Of course I could not let her have all that fun without me!

What did you initially think about our form of movement and what reset felt the strangest?

Initially it was extremely hard. I have worked in construction/maintenance field for many years. About 4 years ago I moved into a supervisory position, which turned into a lot of office work and not a lot of physical work. I was surprised that normal everyday movements could be so difficult. I think my hardest reset was bending down, touching the floor while raising my leg on the same side. I had always done it raising the opposite leg. Dead bugs are tough too.

What were your physical limitations before starting OSi and how has participating in OSI solved/started solving them?

I have had 2 back surgeries, and smoked for 40 years. Since I have been coming to OSI, my back pain is zero and my breathing has improved 200 percent. My strength and stamina is improving every week.

Is there anything you are able to do or is easier to do now that you've been working out as OSI and your movement has improved?

Everything I do now is easier. At my age (62) I may not be able to compete in a tough man course, but with the results I have seen at OSI, who knows!

I can’t say I have a “favorite thing”. The way it works at OSI, I can continue to challenge myself. I can go a little faster, use a heavier weight, go a little further. It is up to me. The instructors always give advice and a little nudge, but it is always to help to go a little bit more.

What is your proudest achievement/next big goal at OSi?

I think when I did the ropes for 5 minutes was the best feeling. There are a lot of little goals that I reached that gave me that good feeling inside, because when I first started here, I could not see myself ever getting anywhere, like I had at the other “gyms” in the past. 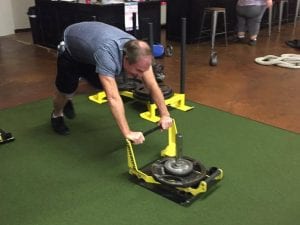