Here at OSi, we're forming a group to compete in the Spartan Sprint Race in Concord, NC, on April 9th, 2017. We're lucky enough to have a Spartan pro amongst our ranks and we've officially named him as our Captain - he didn't really get a say but we're confident that he'll successfully lead us to the finish line! So we reached out to Captain Steve to get some tips, tricks and insights. Read his EXCLUSIVE interview below! 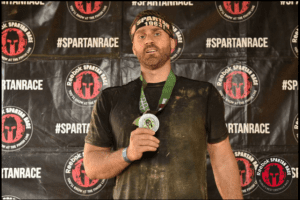 OSi: How did you get started in Spartan Races?

S: I honestly can’t remember. I have a buddy that was getting into triathlons (about 5 years ago) and that inspired me to “do something”. American Ninja Warrior (TV show) was getting big at the time and think I just happened to see a Spartan race ad on social media, did some YouTube research and figured why not!

OSI: How many have you done?

S: Since 2014, 8 Spartans and 1 Tough Mudder. More than anything, these races keep me motivated to keep working out. I try to schedule one every 4 months or so.

OSi: What’s your goal in your next competitive Spartan Race?

S: While I don’t run the competitive “elite heats”, my new goal in the “open heat” is to finish within the top 10% of the three categories spartan tracks (overall, age group, gender).

OSi: How does the training you do at OSi cross into the obstacles you tackle in a Spartan Race?

S: OSi prepares you to kill all the weighted carry obstacles - and there will be at least two. More than that, everything about small group workouts prepare you for all aspects of a spartan sprint . Not to mention being able to handle the burpees!

OSi: What has surprised you the most about doing Spartan Races?

S: The people! It’s not just a sea of fit people. It’s all shapes, sizes and ages working together to achieve the same goal - crossing the finish line as quickly as possible. It’s a really great community, just like OSi.

S: Each year they always add a few new ones, so we’ll see. Depending on the terrain and the mile marker it’s located, most dreaded might be barbed wire crawl. I tend to cramp easily during races and army crawling gets me. But, now that I’m crawling at OSi… Favorite might be the rope climb. Special mention - “bucket brigade” a five gallon paint bucket is filled with rocks and carried for some distance. This used to be my most dreaded but OSi has helped change that around. (I also have a bucket at home I carry quite a bit now).

OSi: What’s the biggest take-away from accomplishing a Spartan Race?

S: The feeling after completing one. It’s a proud moment. It reinforces why I workout (at least one of the reasons why) but I expect everyone’s biggest take-away will be different. As the Spartan race saying goes, “you’ll know at the finish line”.

OSi: Any other pieces of advice you’d give to your Spartan Race team?

S: One foot in front of the other. We’ll jump over the fire pit and cross the finish line together!

Any members, their family and friends are welcome to join us and participate in the team race with us! Check our Facebook page and the Spartan Sprint Event page we'll be updating with more information, specially geared Spartan race training sessions! We'd love to have you join us!