Michael and Emma Vogel - Partners in Everything!

On July 22nd, 2016 Michael and Emma said I do!  Leading up to that point, they've been working hard together; not just on planning their wedding, but also getting stronger and healthier as a unit at OSI.  Michael started OSI in January 2016 and Emma joined him a month later in February.  They have attended faithfully through all the wedding craziness and after taking a break to get married and go on a honeymoon, the newlyweds have been back at it and killing it!  Congratulations Michael and Emma Vogel on being OSI's spotlight members!

How did you hear about/what made you decide to try OSI?

Michael: I had heard about OSI from my sister and brother-in-law, Sam and Jenny Brown, but in January I got the chance to start working out there through my job at Stick Boy. I had never before regularly worked out at a gym because I lack a lot of self-motivation to go pick up weights and put them down again. OSI gives me an opportunity to work with a group of people and work on everyday movements that I need strength for. I love that OSi has become yet another way for downtown Fuquay to be so wonderfully interconnected.

Emma: I was hearing about it so much from Michael, as well as Sam and Jenny, who have been going there for a while. I was really looking to make some health and lifestyle changes, and had already started working out daily, so I decided I wanted to try it out to see if it would be a good addition to my workout routine!

What was your initial reaction to the OS form of movement/resets?

Michael: I enjoyed them because I could enter into the workout gradually and then increase my movement into a heavy strength or cardio movement. I used to always be nervous about working out, but when I started going to OSi I actually would be excited about going because I would gradually get my body into the mindset of the workout.

Emma: Even before I went to OSi, I knew just by hearing about it that it was going to be so different than any workout I had tried before, and that was intimidating at first. I had always enjoyed working out by doing cardio, but I had never considered myself to be very strong, so I had never done any sort of strength training before. Needless to say, I was incredibly sore after my first couple classes! However, learning how to do the resets helped so much, and after a couple months, I found myself enjoying OSi more and more each time I went.

How did participating in OSI help you get ready for your wedding day? 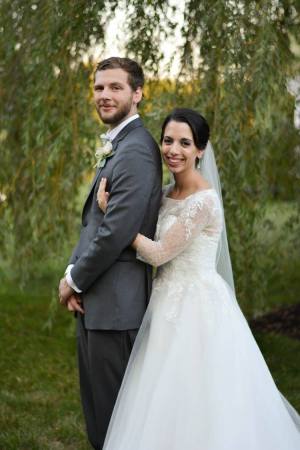 Michael: I mean, I was in a three-piece tux on the day, so if need be it would have done a great job at concealing any lumps or rolls that could have been there. But I was glad that for the wedding day, I felt healthy and I knew that I looked healthy.

Emma: Like I mentioned early, 2016 was a big year of positive lifestyle changes for me, and OSi played a huge part in that. By eating clean and working out regularly, I lost a little over 25 pounds in between January and July. But even putting that aside, OSi helped me FEEL better and FEEL stronger than I ever have before in my life, which definitely gave me a lot of peace of mind on our wedding day.

You try to workout together when you can, who would you say is the most competitive? Any specific examples?

Emma: We both read this question and laughed because we both knew right away that the answer was me. Recently, when we were working out together, Danae mentioned that Michael had more achievements on the Wall of Wonder than I did, which immediately prompted me to axis crawl for five minutes straight in my next station so I could put something else up there. And axis crawling HURTS.

Michael: If it had been the other way around, and Danae had said that Emma had more achievements, I would have just said “Well, good for her!”

Emma: Despite my competitive tendencies, having a goal to work toward motivates me in anything I do, so the Wall of Wonder has actually been really helpful in pushing me to grow at OSI.
What is your favorite and least favorite exercises to do at OSi?

Emma: My favorite exercises usually involve things where I can feel myself working my core or legs, so I like doing deadbugs, the versaclimber, and slowly but surely, running the sled has worked its way into my heart. My arm strength is where I’m weakest, so doing anything with ropes or heavy farm work is killer.

Michael: I’m the opposite of Emma. My goal with deadbugs is just to keep my legs from falling on the ground. I just can’t do them that well. I love how farmwork mimics a lot of the work I have to do at the bakery. Those bags of flour are heavy and so I need the practice! My favorite thing though is most likely anything with the box. I like seeing how quickly I can get over the box by touching it as little as possible.

What is your proudest achievement and next big goal at OSi?

Michael: My first day at OSi had to do Sweep Throughs and I could barely stay on the beam. Within a few weeks I was able to confidently do them and I was quite proud of that achievement. My next goal is to be able to do a standing jump on top of the three foot box. I think I’ve been able to manage that a couple of times, but I’m still nervous about busting my shins on the way up!

Emma: My proudest achievement may seem small, but I remember during one of my first workout sessions at OSi, we had a station that involved pushing and pulling the barrel. And I couldn’t do it. Tim was super patient and encouraging, but I was so frustrated that I couldn’t get them to budge. A while later, it hit me while I was working with the barrels again that even though it still takes a LOT of effort and is not by any means easy, I had figured out which muscles I needed to use and strengthened them to the point where it was indeed possible to move the barrel! That’s just one example of a way that I can tell I’m stronger and so much more in shape now thanks to the trainers at OSi. My next big goal would be to increase the weight of the kettlebells that I use for different exercises, get a little more stamina on the ropes and…dare I say it…work on being able to do some pullups. Although I have a feeling I may regret admitting that goal out loud ☺