1) At what point did you start to think about joining a gym, and what brought you to OSi? 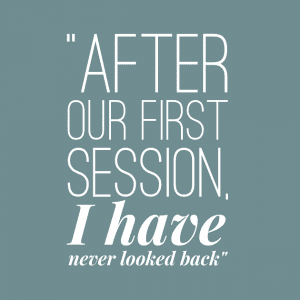 I was a dedicated runner. I use to run every day just for the enjoyment it brought me. In 2013, I injured my leg and had to stop running all together. I was devastated. This was the only way I knew how to deal with stress. I ended up gaining over 60 lbs in less than a year and was not happy in my day to day life. In 2014 my sister was getting married. I wanted to lose weight for her wedding. I also wanted to lose the weight before my 30th birthday (July 2015). I went to a traditional gym and tried to sign up with a trainer. I did not have a pleasant experience. I walked out of that gym and never wanted to go back to any gym. After a few months of building up the courage, I called OSi and spoke to Dani. She was amazing. She made me believe in myself again and that I could feel better. After our first session, I have never looked back. OSi has a positive atmosphere. Anyone who walks through the door can feel the support from those around. It was the reason I came to my sessions every week and still do. Everyone I encountered was a motivation to me and others. I also love that I can take the things I learn at the gym and work out at home too.

2) Were you into fitness when you were younger? Did you play any sports growing up?

I grew up on a tobacco/dairy farm so I was constantly “working out”. Milking cows, unloading/loading feed, carrying calves, and putting up/out hay were all part of my daily life. I was into sports at my school. I was a cheerleader and cross country runner. I lifted weights in high school and played basketball and volleyball just for fun.

3) Being Honest...What did you initially think about our form of movement and being on the ground when you first saw it, aka how crazy did you think we really were!?

I was hesitant about the training methods at OSi, but so tired of how I was feeling and living my life that I was willing to try anything. Anything Dani said I did it and did not question her methods... out loud. I thought in my head how can this really work. How is crawling going to help me reach my goal?

4) When was your ah-ha moment here at OSi?

It took a few months for me to have that “ah-ha” moment. And if I am going to be honest I still have them. The first moment was when I had my first measuring with Dani. When I saw the numbers go down, I realized that it was working and it pushed me to work even harder.

5) How long have you been at OSi and how soon did you start feeling the benefits of playing here?

I started at OSi in July 2014. It took about 6 months before I felt any better, mentally or physically. I was in such a bad place in my life when I joined that I didn’t feel good about myself because I listened to the wrong people. Now I couldn’t imagine life without OSi.

6) What is your favorite thing to do at OSi and Why?

My favorite thing at OSi would be hitting the tire with the sledgehammer. What other gym could I go to and just hit something with a sledgehammer? That is therapy in itself.

7) What is your favorite reset?

There are two resets I think are beneficial to me, rocking and head nods. Rocking can be done many ways and it loosens the entire body. I carry most of my stress between my shoulders. Head nods allow me to work this stress out and move without the stiffness and pain.

8) What has been one of your biggest obstacles when it comes to sticking to your game plan in the past?

The biggest obstacle for me is myself. I am one of those types of people who want to do better and when I don’t meet the goal as fast as I think I should, I get discouraged.

9) How has OSi helped redefine that obstacle?

OSi has redefined my way of thinking. It’s ok to fail as long as I am still trying and doing my best because that’s not really failure.

10) What goals have you achieved at OSi?

I have lost 30+ lbs so far and multiple inches. I am physically and mentally stronger. I am also more motivated to live an active lifestyle and motivate others around me to do the same. A big goal for me was to be able to set my compound bow at 60 lbs. This last hunting season I was able to do just that.

My first goal is to get back down to my healthy runners weight. I also want to hike the Grand Canyon as my graduation present to myself and build myself back up to run at least a 5k but I hope to run a half marathon.

13) What does your typical diet consist of?

My typical diet is eggs, chicken, fish, and lots of veggies, but my downfall is sushi.

14) Any words of advice for new members?

My advice would be to never give up. Life is too short to live it watching from the sidelines. Get out there and try new things. It may be scary, but well worth it in the end.