Scott is our spotlight member of the week!  His training consistency gets extra applause because he manages to come to the 5:30am classes every week!  Scott is a Krav Maga (and many other martial arts) expert and after teaching a great woman's self defense class last month, he is offering another opportunity on August 20th!  Congratulations Scott!  We are all rooting for you to accomplish your new goals!

I first heard about OSi about four years ago when I was asked to teach a few Krav Maga classes in this "little gym" in Fuquay. The Gym was run by some pregnant lady and a guy who was into Superman and drove a Mazda Miata (he's referring to OSi Co-owners, Dani Almeyda and Tim Anderson). They seemed cool enough! Although the time teaching Krav Maga was brief, I had a feeling I was going to be involved with OSi again in the future. 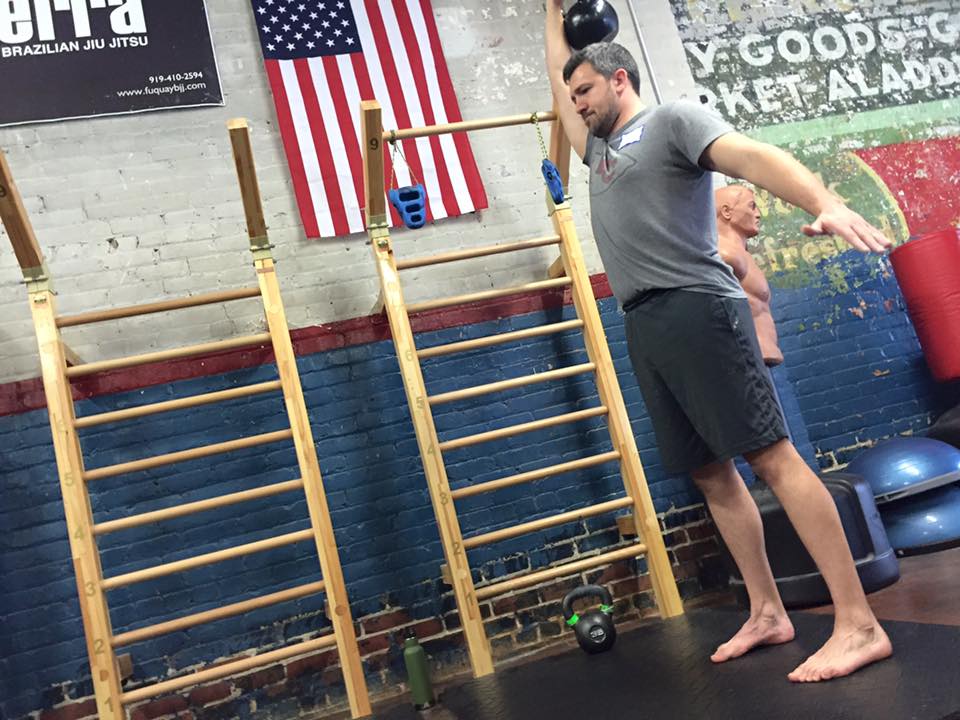 What is the funniest reaction to your resets/exercises you've received?

I think it has to be from my kids. As I begin to rock: one, if not both kids, see that I have clearly created a cave for them to crawl into. Usually they mimic the rocking which completely disrupts the exercise and it becomes a three person pile up on the floor.

Have you noticed anything in everyday life that is easier to do or you are able to do better?

Absolutely! Years of different sports (Scott was a high level college soccer goalie) and, in particular, Judo and Jujitsu have rewarded me with constant discomfort in my neck. After just a few weeks of pressing reset I felt huge improvements.  The range of motion in my neck and general stability through my core improved tremendously. I spend a lot of time driving; being able to check blind spots without sharp neck pain that reminds me of the times some MMA wannabe cranked on my neck is quite refreshing.

What is your proudest achievement and next big goal at OSI?

My proudest achievement so far is making the commitment to train. I spent several years not training and developing some bad habits, especially in matters of cheeseburgers and oreos.  Bad eating habits and my schedule has always stopped me in the past.  Reaching my goal of consistently training has been a great kick start. My goal is now tied to weight loss, I'm excited to be at this point.

How has OSi helped/is helping you presently to overcome that obstacle?

The availability of different class times has helped tremendously. I cannot admit to being a fan of doing much before 7am, but the 5:30am classes have been quite convenient with my schedule. I'm able to train and get home with plenty of time to get ready for the day ahead. The OSi team is also really great when it comes to being supportive and providing advice.