Our Spotlight Members for this week are Dave and Amanda Pickering!  They started together a little over a year ago and you can always seem them as partners working out as a unit!  They were chosen as our Spotlight member because of their dedication to OSI and fitness; plus the fact that whenever they come to class they are pushing themselves hard and encouraging everyone around them to do the same!  Congratulations Amanda and Dave!! You guys rock!

Amanda: When I was recovering from shoulder surgery in 2014, my coach had me start crawling.  I started looking around online for crawling techniques and stumbled across Tim’s videos and the first “Pressing Reset” book.  I bought the book and was pleased to learn that OSI was right here in town!  I checked them out over a year ago and have been participating in small group classes ever since.

Dave: That was really Amanda's doing.  She had heard about OSI and convinced me to try it.  We did the 2 week trial, and I wasn't really sure what I was getting myself into.

What did you initially think about our form of movement and what reset/event “sold” you on OSI's exercise type?

Amanda: Since I had been working on crawling up and down my hallway to rehab my shoulder, the other resets didn’t seem as strange to me.  When I began small group classes at OSI and started incorporating the resets more and more into my day, they eventually replaced an old morning “stretching” routine I had been doing for years.  I’ve been doing resets every morning (15-30 minutes, depending on my mood) for a little over a year now and have found that I feel more “open” and “stretched” than when I was just doing static stretching exercises.  Now, doing static stretches seem strange to me – I like to move!  I still incorporate some stretches, combined with resets, into my cooldown routine after small group class.

Dave: It did take me awhile to get used to things.  The idea of crawling as part of exercise was a bit foreign to me.  To be honest, I was exhausted after the first couple of classes.  And I probably do a lot more now.  I don't think there was a single thing that "sold" me.  It was more of a gradual acceptance.  Being able to do more and seeing the result each class.

Have you noticed anything in everyday life that is easier to do or you are able to do better?

Amanda: I’ve noticed that I can crouch and lift heavy pots in and out of my floor level cabinets much easier, as well as carry more bags of groceries at one time.  Funny story – I have 15 lb freeweights that I had always used as my “challenge” weights.  The other month I was moving them to another spot and just picked one up – it was so light!  I had to check to see that I picked up the 15 –pounder.  Those used to seem heavy (wink!).  Not anymore!   Other than that, I’ve noticed that other types of exercise have been positively impacted.  I feel stronger biking, and feel stronger and more supported by my body while practicing yoga.

Dave: I don't know if there are specific things that I can point to.  I do know that I feel stronger.  I am also finding that my clothes don't fit as well :).  I am having to wear a belt with a lot of my shorts, which I never had to do before.  I do think that OSi has generally helped my knees to be better,  I have had a lot of trouble with them, and have had the left one operated on twice.  I wasn't really sure how well I would be able to do with squats, but I think now my knees are much stronger and don't typically bother me.

Amanda: I like the “get over the box” exercise – mostly because it is more like play than exercise, and it’s getting easier each time I do it.  I also appreciate hammering the big tire for its stress relief benefits, as well as “tire flipping” because it makes me feel like a warrior beast!  I don’t like “rope flinging” (aka waves), which probably means I need to do more of it.  And yes, I like the VersaClimber!

Dave: Well, I actually really like the ropes.  At least most versions of them.  There are some that aren't as good (the single arm ropes while in plank position comes to mind for that) but for the most part I like them.  I think being tall really helps with that.  I also enjoy the sled push and farm work.

You try to workout together when you can, who would you say is the most competitive? Any specific examples?

Amanda:  I don’t think one or the other of us is more competitive.  Sometimes it is situational.  When Dave got his name on the “board” (Wall of Wonder), it really encouraged me to get mine up there too!  Now we each have our names on the “board” for a number of different accomplishments.  We support and cheer each other on during class all the time.

Dave: I think we are both pretty competitive.  I am not sure who is more so.  We don't really try to compete at OSi that much.  There are clearly things that Amanda can do better than I can, and things that I can do better.  But I think when she is able to get something on the board or complete some achievement it motivates me to do something.  Maybe not try to match the specific accomplishment, but to do something.

What exercise programs have you done in the past and what's different about OSI that caused you stick to it?

Amanda: Back in the day, I belonged to gyms and worked out regularly on the cardio equipment and machines.  Then I discovered Tai Chi, free weights, and walking when a knee injury side-tracked me.  In the past decade, I’ve practiced a lot of yoga but also biked, walked and hiked.  The main thing I like about OSI it is that each workout, each day, is different.  The other week, we did an exercise I had not done before – and I’ve been participating in small group classes for over a year.  The variety is the most important thing – I get bored easily, so it helps prevent that.  OSI feels better to me than weight machines – it feels more holistic since it incorporates more than just one or two muscles per exercise.  My body feels more integrated.  It has given me more strength than machines ever did, and more than yoga (which was better than machines).

Dave: I have never really been involved in an exercise program.  I could never get into it.   Mostly they were boring and repetitive.  I enjoyed that each class at OSi is different.  You never know what you are going to do on any given day.  I think the timing for each station is pretty good.  5-6 minutes gives you enough time to push yourself, but not so long that you get bored.  Also finding something that works for both Amanda and me is helpful.  It lets us motivate each other to go and do more.  I also like that it is a small group of people in each class.  So you get a lot of attention during the class, and it feels like everybody is working together.  Its not just a large number of people going to a gym and then working on their own.  So the sense of community with OSi is very nice.

What is your proudest achievement and next big goal at OSi?

Amanda: I still can’t believe I lasted through 5 minutes of white rope flinging.  Big goal?  I don’t really have any in mind, but I try to continually challenge myself by using heavier weights or doing an exercise for more time before resting.

Dave: I guess my proudest accomplishment is that for one class, where there were only 2 of us, we were told we should just try to get accomplishments to go on the wall.  I was able to get on the wall for 4 things that class.  That was a lot of work, but it was nice to get that accomplishment.  My next big goal would be to shift from doing push-ups on my knees to doing full push-ups all the time.  I am getting there, but being a bigger guy, there is a lot more weight to deal with.  The other thing I would like to get to at some point would be a pull up.  I have had some shoulder issues for the last couple of months (tendonitis) that have limited me in these areas.  Things seem to be (slowly) improving with my shoulders, but I have generally been trying to be careful not to do too much and exacerbate my shoulders. 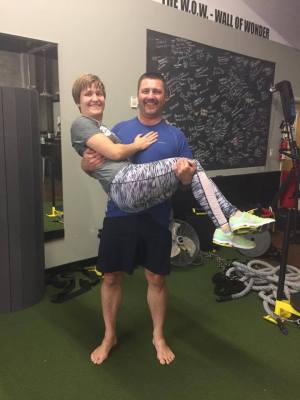